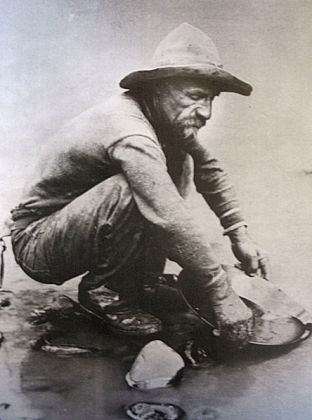 Here is a peek into California’s Gold Rush Days that may surprise you.

Most of us have heard about the day in 1848 when James Marshall spotted gold glittering in the tailrace of #John Sutter’s sawmill by the American River.  That discovery set off a wild stampede as gold seekers raced to California to claim their fortunes.

But this story is about Nancy Ross and Peter Gooch, both slaves, who were brought by their owner to California in 1849 or 1850 during the height of the gold frenzy.  Nancy was forced to leave her baby, Andrew, behind in Missouri.  In California she labored as a washerwoman, seamstress, and cook while Peter worked as a farmhand.

As hundreds of thousands of people poured into the #Coloma area in search of gold, the population grew so fast that California became a state in 1850.  Since slavery was outlawed in the state, Nancy and Peter were freed.  They continued to work long hours for the miners  — cooking, washing, mending clothes, and doing farm work and construction.  But now their pay went into their own pockets.  Nancy married Peter and became Mrs. Gooch.

Many years passed.  When Nancy had worked and saved enough money, she bought her son Andrew Monroe and his future wife, Sarah, out of slavery.  After her husband died, Nancy Gooch scraped together more savings and bought four train tickets for Andrew, Sarah, and their two young children, and they joined her in California.  She had not seen her son in twenty years.

The Gooch/Monroe family continued to work hard and save their earnings.  By the 1880s, many forty-niners sold their holdings and moved back East, with little to show for their efforts.  At the same time, the Gooch/Monroes purchased 80 acres in Coloma, then 240 more.  They finally purchased the land where Sutter’s Mill originally stood, the land where James Marshall had first discovered gold.

Marshall had grown old and penniless.  He died in 1885 and it was Nancy’s son, Andrew, who buried him and provided his funeral service.

Nancy Gooch went from slavery to being a successful businesswoman.  The land belonging to her and her son became a productive apple and pear orchard in the Coloma area.  She died at age 90 and is buried in the Coloma Pioneer Cemetery.

Hi, I’m Linda Gondosch.  I love the story of Nancy Gooch and the way it shows how hard work, goal setting, and perseverence can pay off in the end.  As a former teacher and the author of nonfiction books, I would like to recommend the following children’s books about the California gold rush: